I’m glad we went back to Japan. Our previous trip in February was fun, and we got to see much of Tokyo, but this time we got to experience springtime in Japan (including the beautiful cherry blossoms) and I was able to visit Osaka, Kyoto and Nara for the first time. Truly a trip to remember! Not to mention our smooth ride on the Shinkansen bullet train.

But, I’m getting ahead of myself. I have many photos to share with you, so I’ll split this into a couple posts and try to keep them brief — unlike last time!

First, we had a day in Tokyo (well, I did. Will had to work.) I revisited the Imperial Palace grounds, including the Imperial Palace East Gardens, where I got my first glimpse of Japan’s world-renowned cherry blossoms. It was late March, so it was still fairly early in the season, but I lucked out and managed to see numerous trees that were slightly full. The weather was great for a stroll. 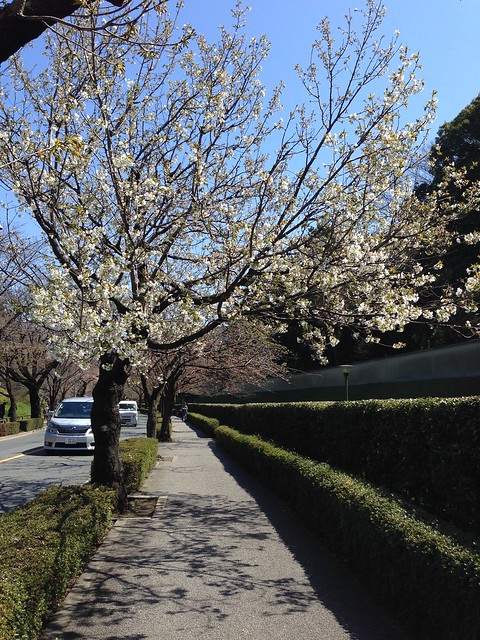 END_OF_DOCUMENT_TOKEN_TO_BE_REPLACED

At the park you’ll find several temples, a shrine, a large pond with a fleet of paddle boats and swan boats for rent, a zoo (Ueno Zoo: Japan’s oldest zoo, known for its giant pandas), a small children’s amusement park, multiple museums, and more. Apparently, the park grounds were originally part of the Kaneiji Temple, one of the city’s largest and wealthiest temples during the Edo Period. The grounds were later converted into a Western-style park and designated in 1873 as the first park in Japan. END_OF_DOCUMENT_TOKEN_TO_BE_REPLACED

On our second day in Tokyo, we took the train to Asakusa to visit the Sensoji Temple (Buddhist) and the Asakusa Shrine (Shinto). It was a beautiful, clear day, which made it nice to walk around. We pretty easily found our way to the Nakamise Shopping Street, a strip of shops/stands selling souvenirs, food, shoes, and more. It was pretty crowded! I saw a lot of trinkets and items that were cute and that I wanted to buy … but Will reasoned that we’ll find nicer stuff in Osaka (we’re planning a trip there later this Spring), so I resisted the urge. We also spotted various ladies just out and about in their kimonos, which I didn’t expect.

The Nakamise Shopping Street runs from the Kaminarimon Gate to the Hozomon Gate, the entrance to the Asakusa Shrine. Both gates had those large lanterns and the guardian deities on either side, as well as tons of people trying to take their photo in the same spot (naturally).

After visiting multiple temples on this trip, I observed there are similar rituals performed at each one. END_OF_DOCUMENT_TOKEN_TO_BE_REPLACED