Going to be away for the next few days….won’t spoil the surprise for those of you who don’t know where we’re headed….but I’ll leave you with a few shots from the other day to help tie you over. And yes, you should be excited, that means some awesome pictures are coming soon! 🙂

A big crowd gathered in Insa-dong to watch some Korean folk farmers’ dancing and music, which we’ve seen a few times and I personally really enjoy. Hypnotic to listen to and watch. 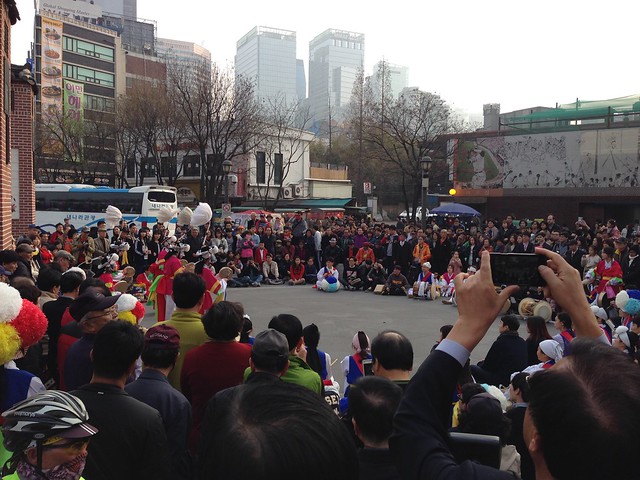 Also, we discovered a Cafe Brahms while leaving Samcheong-dong the other day. I know my sister will appreciate this. If you look closely at the door, they serve “Coffee, Bear, & Drink.” Hehe. You can tell Will’s really excited about it, too. END_OF_DOCUMENT_TOKEN_TO_BE_REPLACED

Spring has finally arrived in Seoul. The temps have miraculously, overnight, shot up to the 50s, 60s, even 70 this weekend. Woo! Thought the warm weather might never come.

The sunny weather on Saturday was perfect for taking Will to see the Bukchon Hanok Village, which he hadn’t been to yet. I didn’t take many photos, since I took so many last time, but here are a few new shots below. It was SO busy! Way busier than when I went in November, but it makes sense. The warm weather has drawn everyone out. We ate some of that amazing shaved sorbet at Savoureux, walked past a cute flower shop, discovered one of many handmade jewelry shops in Samcheon-dong — Eunnamu — with some beautiful pieces, and ventured through the many walkways and narrow streets of Bukchon.  END_OF_DOCUMENT_TOKEN_TO_BE_REPLACED 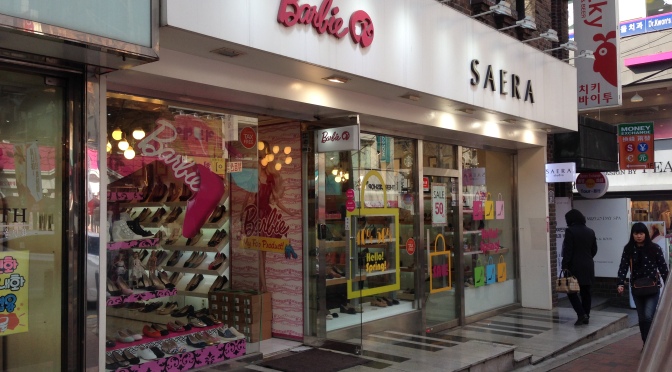 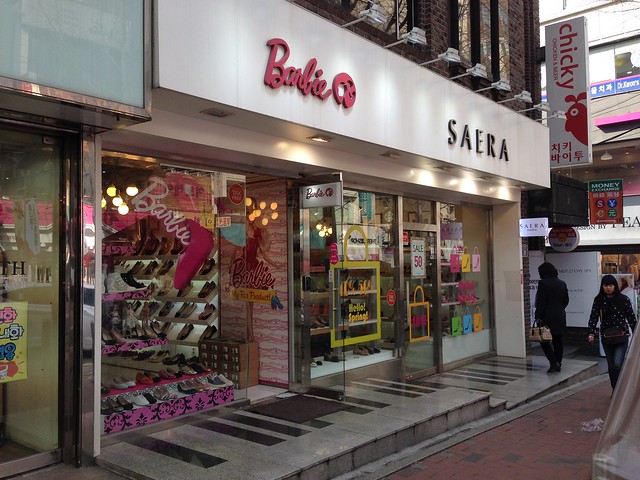 As soon as I crossed into the Ewha Womans University campus, I liked it. It’s very open, verdant, and — oh my goodness — no motorcycles allowed on campus! END_OF_DOCUMENT_TOKEN_TO_BE_REPLACED

Just when I thought I’d seen practically everything there is to see in Seoul, I stumbled across Yongma Land. A true hidden gem — it’s not a destination that comes up when you Google things to do in Seoul or when you flip through a travel guide book — I came across it on a few blogs. So, what is Yongma Land?

It’s an old, abandoned amusement park located just a few minutes’ walk from Mangu Station. I don’t know the full story of when it closed, why it failed, or how the current owner came by it. When you walk up to the gate you see a sign forbidding trespassers, but listing the phone number of the older gentleman who owns the property. You can call him and he’ll let you in for 5,000 won/person. 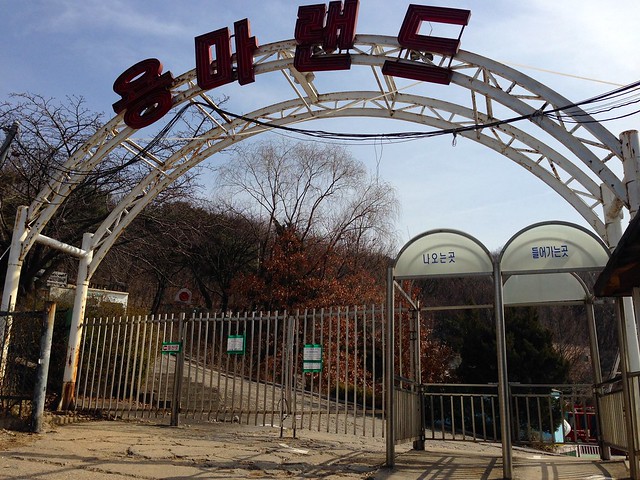 Once you’re in, you pretty much have free reign. Walk around and explore, step into the rides, climb, run, jump, whatever you please (at your own risk, of course). END_OF_DOCUMENT_TOKEN_TO_BE_REPLACED 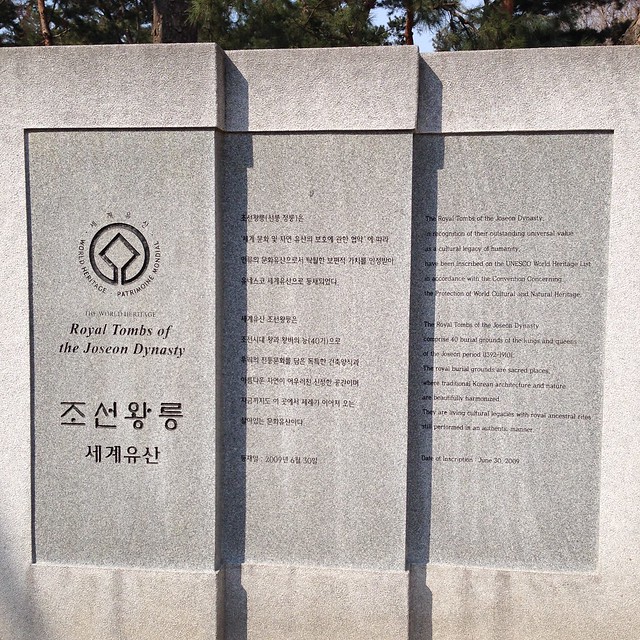 My friend has been telling me about Hongdae for a while. It’s one of Seoul’s college areas, located right by Hongik University, and she’s told me all about how you can find many eateries and budget-friendly shops (aimed at broke college students). Lively nightlife, too. While I’m just now getting around to blogging about it, I actually first visited Hongdae back in January. It was freezing that day. So cold, I had to stop inside several stores to thaw off before continuing to walk around. It was a very brief jaunt.

Hongdae is supposed to be a pedestrian friendly area, but… you still have to watch out for cars and motorcycles or you’ll end up squashed on the road. During that first trip, I came across everything from cafes and bars, to body piercing shops, nightclubs, food stands, cat cafes, nail salons, clothes shops, even a Trick Eye Museum. There’s also a CGV movie theater right when you exit the Hongik University Station. Plenty of name-brand stores like H&M and New Balance, too. 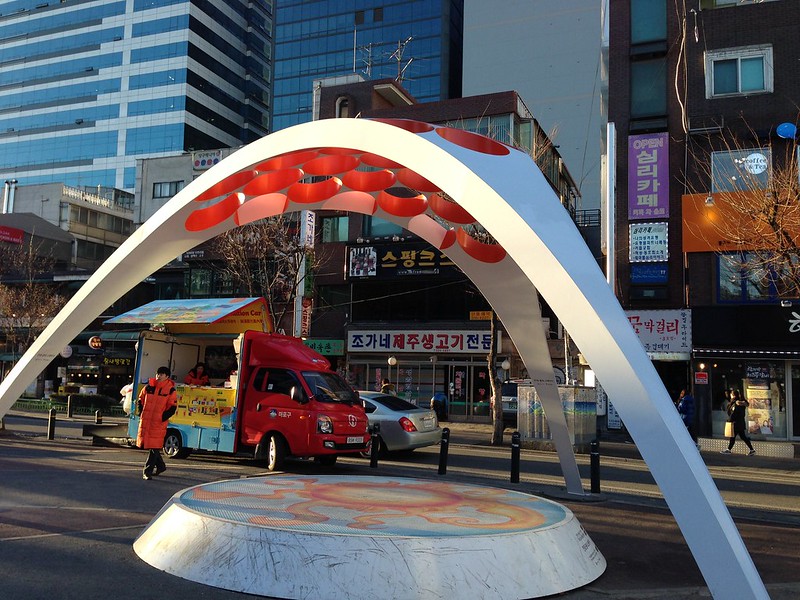 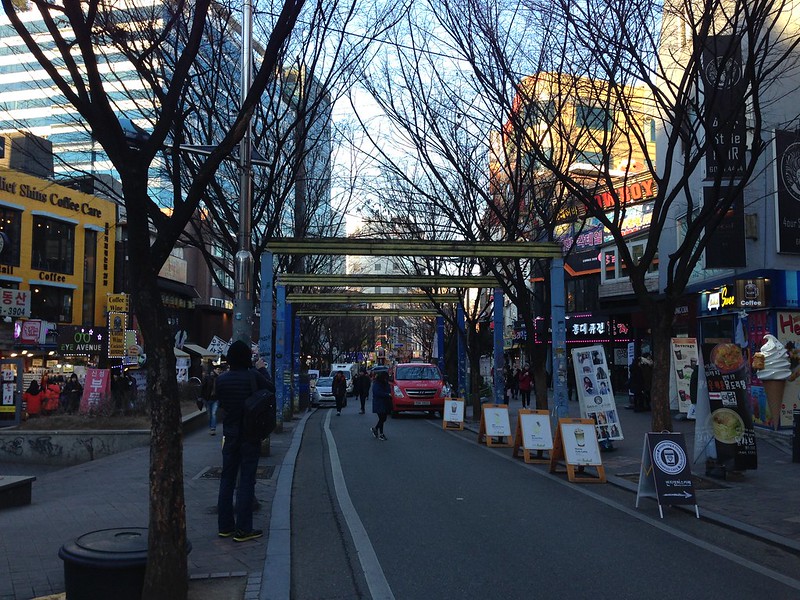 END_OF_DOCUMENT_TOKEN_TO_BE_REPLACED

Sorry I haven’t posted in a while. It’s mainly because I finally reached my 3GB storage limit on WordPress, so I had to find another way to still be able to share all my photos with you. Kind of a pain…but I’ll save that for perhaps another blog post.

Now, to the 63 Building. It’s basically a skyscraper across the Han River that has an observation deck on the 60th floor with some great, 360-degree views of Seoul. It has a few other hidden gems, too. For example, the observation deck doubles as an art gallery called “63 Sky Art.” They’re currently exhibiting “Cinderella,” (through Mar. 22), which is split into four parts or themes: Mouse, Pumpkin, Clock and Shoes. Pretty interesting, if you like art at all. 🙂 There’s a nice cafe on that floor if you want to sit and enjoy the views for a while. 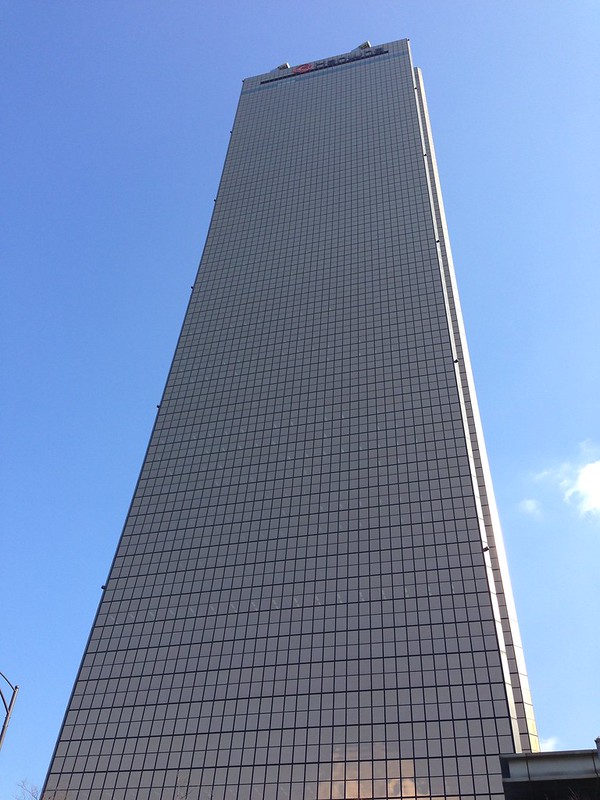