This might seem like a morbid post for some of you, but I was intrigued by the Seodaemun Prison History Hall and the stories those walls had to tell. I don’t believe I’ve ever visited a former prison, and definitely not one that housed prisoners of war.

Seodaemun Prison is located at Seodaemun Independence Park in Seoul. It was built in 1908 and used during the colonial period of Japanese occupation to house Korean independence activists. (After the colonial period ended in 1945, it was used by the South Korean government until 1987.) I shouldn’t say “house,” since many of them were brutally tortured and then executed. The prison was built to accommodate about 500 people, but eventually housed more than 3,000 prisoners simultaneously at the height of protests. They were cramped, their cells had no heating in the winter and no cooling in the summer. They ate small rations of rice and were forced to work long days on the complex building bricks and military uniforms.

The prison is now a museum and a self-guided tour takes you through most of the buildings. You can step into regular cells and isolation cells. You can see the basement where the Japanese interrogated and tortured prisoners upon arrival (life-like scenes are recreated in case you can’t picture the torture clearly enough in your mind), including the various torture devices used. You can also visit the lepers’ building, the outdoor exercise facility and the execution building.

There are various videos and visuals throughout — testimonials from survivors who return to visit the empty prison years later, images of noteworthy prisoners, and photos of what the prison used to look like. I get it. The purpose is to remember and honor all the Korean patriots who died in the name of liberty. And it is definitely moving and sad to even think of what those people suffered. But you definitely feel strange seeing people there with their little kids who are just running around, playing and laughing. Or watching people pose for pictures with smiles on their faces. I don’t know.

It’s amazing how such horrors can happen in a place and hundreds if not thousands of people can die there, and then decades later, it’s empty, renovated, and a tourist attraction. I saw this referred to somewhere as “dark tourism.” Sounds about right. So, on that uplifting note, I leave you with some photos below.

Independence Gate at the entrance to Independence Park. You can still see the pillars of the old Yeongeunmun Gate. 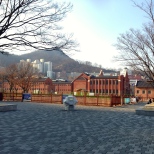 Walking up to the Seodaemun Prison.

Entrance to the prison. 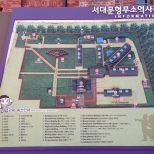 Map of the prison complex. 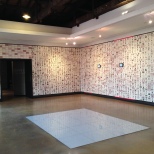 Memorial hall with photos of prisoners who died there.

Torture box with spikes inside. 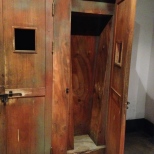 Another torture box, which prevented the prisoner from standing or sitting comfortably.

One of the cell blocks. 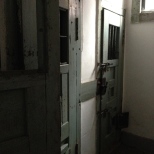 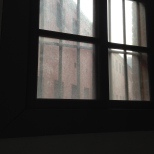 View from a cell. 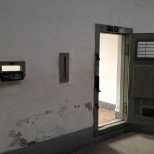 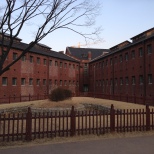 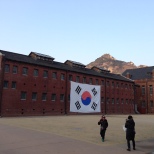 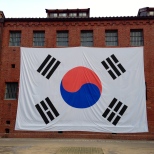 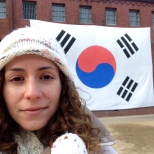 Do you smile? Not smile? Ugh.

Lepers’ building in the back of the complex. 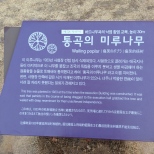 Story behind the wailing poplar.

Execution hall where they tried you and decided whether to kill you.

Tunnel used to transport bodies to a hillside cemetery.